"Love seems the swiftest, but it is the slowest of all growths. No man or woman really knows what perfect love is until they have been married a quarter of a century."
Mark Twain.

Last week was my parents 25th Anniversary! Their Silver wedding Anniversary! how cool is that? We went to Bubbles for dinner (my favorite restaurant) and we had lots of fun :D

I was planning to surprise my dad there. So, I went downstairs to BON BON with my sister and we chose a cake and asked the guy to add the (Happy 25th Anniversary) on it! :)
After dinner, they played the (Congratulations) song, and the waiter was passing the tables to reach ours with the yummy cake. Dad was smiling thinking it was someone's Birthday or something. Suddenly he realized that the waiter was actually heading OUR way! My Dad's face expression was PRICELESS! hehehe :D

I am very happy to be part of this wonderful family. And I hope my parents have many years of love and joy together. Happy 25th wedding anniversary, Mom and Dad!
Posted by Euphoria at 1:28 PM 9 comments: 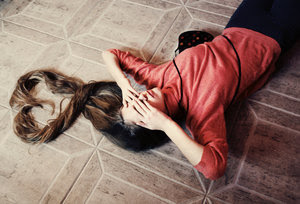 ALANIS MORISSETTE, You learn
Posted by Euphoria at 2:14 PM 7 comments:

I know right from wrong... I just prefer wrong!

Picture by ~Ricoo
Posted by Euphoria at 2:23 PM 6 comments:

Lines are there for a reason, for safety, for security, for clarity. If you choose to cross the line, you pretty much choose to do so at your own risk.

So, why is it that the bigger the line, the greater the temptation to cross it?
Posted by Euphoria at 1:47 PM 6 comments:

“Sometimes we need to stop analyzing the past, stop planning the future, stop figuring out precisely how we feel, stop deciding exactly what we want, and just see what happens.”

P.S. I wonder what's gonna happen to (this)

The more I listen, the more I get into it. Very relaxing, like walking in the clouds. And for some reason, I rarely find people who love this kind of music! Isn't it weird? I mean I love all kinds of Music. YES, ALL! but I must say, that Classical Music is my favorite!
Classics always lift me up when I feel down, it fits my personality, there are so many emotions heard and felt when classical music is played, It's an Art, It's my passion. I think that Classical music is the most refined form of music and the one has been speaking to people for hundreds of years, and few can relate to that!

Here are some of my favorites:

What about you?
Posted by Euphoria at 4:20 PM 3 comments:

I'm terribly sorry for just the thought of deleting you! It's been ages. And I miss you so bad. I need to tell you a lot of things about me. I've been questioning myself lately. I kept myself busy with my foolish thoughts. But i'm feeling much better now, and i'll be posting again :)

“Eventually all the pieces fall into place....until then, laugh at the confusion, live for the moment, and know that everything happens for a reason”
Carrie Bradshaw

P.S.; Happy Ramadan to you all, and may Allah accept our deeds :D

- I've just received a message in my Facebook inbox from a total stranger saying:
"mohamed,27 years,egyptian doctor in jeddah,looking for a girl friend, are u ready to be my girl friend :)?my mobile number is 050*******"
They drive me crazy :S

- For 2 years i've been reading EVERYTHING, but romance!! guess what? not anymore! Judith McNaught is an amazing author. I just finished "Once and Always" girls you all gotta read this novel! awww.

- Dreams replay my life to mock me and show me things I should have done, but didn't!

- Has anyone tried Celebrity Sexy Teeth ? I need your feedback.

- Last week was my final job interview with a bank, still waiting for the call!

- I love Kuwaiti blogs! they are fun!

- So happy for Lebanon, but I hope it lasts. In the news.

- I gained 3 kilos, which is a disaster.

- Everybody in Jeddah is going crazy for Mohannad (Kıvanç Tatlıtuğ)

- What are your summer plans, people? :)

Posted by Euphoria at 4:15 PM No comments:

I was just reading an article about "The Fatwa Wars" on Asharq Alawsat.com by Ahmed Al-Rabei.

Seriously! I'm getting confused. Why are they doing this to us? Is it a game?Swear to God, they're getting on my nerves! The middle east is getting more and more "masculinized" in the name of Islam!

Has anyone of you watched the "Al Hadath" show on LBC on Sunday?It was about Saudi TV hostesses! can you believe it? out of all the important "issues" we have, they picked this topic! now what's wrong with Saudi hostess?! One of the guestes -Shaikh- said that "TV hostesses want to appear on TV just to show their bodies!"

CAN YOU BLELIEVE THIS GUY! and he kept going on saying that Saudis have a "khosuseyya!"

The Saudi woman is smart, well-educated, and need to be given the chance to prove that she's as good as any other man! here are some of my favourites:-

Dr. Selwa Al-Hazzaa: "The first Saudi woman to win the prestigious award for excelling in a male-dominated bastion of medical sciences and community service and one of the most powerful Arab women in 2005 by Forbes Arabia, the Dubai-based Arabic edition of the world-renowned business and financial magazine Forbes, it comes as no surprise that Dr Selwa Al-Hazzaa, a Saudi doctor who is head of ophthalmology at King Faisal Specialist Hospital and Research Centre in Riyadh and runs the most prestigious ophthalmology clinic in the city, is a pioneer in her field and an outspoken women's advocate who promotes her country and its women with pride"

- Dr. Hayat Sindi: "A leading Saudi medical researcher who was born in Mecca. She has invented a machine combining the effects of light and ultra-sound for use in the esoteric field of biotechnology. Her major project is being carried out in partnership with the universities of Exeter and Cambridge. She is the only Arab woman in the field of biotechnology."

- Dr. Thoraya Ahmed Obaid: "The executive director of the UN Population Fund (UNFPA) and was the first Saudi Arabian woman to receive a government scholarship to study at a university in the United States where she received a PhD. in English Literature from Wayne State University. She has had a distinguished career within the United Nations helping governments to establish women and development programs, and is respected leader in the international community forging a new global population agenda."

- Dr. Ilham Abuljadayel: " Biotech scientist and the sole inventor of the TriStem Technology. She discovered an infallible and cheap technique for changing white blood cells into perfect, pluripotent stem cells – the gold standard of stem-cell values." If you wanna read more about it here is the {link}

Dr. Noura Al-Asheikh, head of the Women's Department at the Ministry of Social Affairs; along with Jowhara Al-Anqari and Dr. Suhaila Zain Al-Abideen, both prominent members of the National Society for Human Rights.

Dr. Hanan Al-Ahmedi, head of the Women's Department at the Saudi Management Society and ALOT more!

You see, I LOVE my country, and Saudi Arabia is actually changing and developing educationally, economically, and socially! why take us 100 years back? now that's my eternal question!

I totally forgot all about it !! That's so embarrassing! And I have no idea how to make it up to her. I need your help guys. SERIOUSLY!! you know how moms' talk to each other and actually "brag" about it!
So, what should I buy her? Any creative ideas?

O Allah, You are the Lord, there is no god but You. You created me and I am your servant, and I try my best to keep my covenant (faith) with You and to live in the hope of Your promise. I seek refuge in You from evil done by me. I acknowledge Your favors upon me and I acknowledge my sins. So forgive me for none forgives sins but You.
Posted by Euphoria at 11:59 PM 10 comments:

I'm having a strong case of "butterflies in my stomach"!

"It's OK to have butterflies in your stomach. Just get them to fly in formation" Hellen Keller
Posted by Euphoria at 9:35 AM 7 comments:

What's wrong with me?


Do you know these symptoms?
What's wrong with me?

I think i'm just missing you!

O rare delight, these pains that break
My heart, dear hope, for thy sweet sake!
Through all the days, in all my woe,
I will not ever let thee go.

If any man should dare to say,
" Thou shalt forget his love one day"
The only answer I will give
Is an eternal negative?

Posted by Euphoria at 4:07 PM No comments:

The Story of the Pencil

I wanna be like a "Pencil" !! I know what you're thinking right now dear readers, but no, Not thin as a Pencil, but like a pencil...This is a story that I really liked from Like The Flowing River, by Paulo Coelho.I just wanted to share it with you. Hope you like it as well :)A boy was watching his grandmother write a letter.At one point, he asked:‘Are you writing a story about what we’ve done? Is it a story about me?’His
grandmother stopped writing her letter and said to her grandson:
‘I am writing about you, actually, but more important than the words is the pencil I’m using.
I hope you will be like this pencil when you grow up.’
Intrigued, the boy looked at the pencil. It didn’t seem very special.

‘But it’s just like any other pencil I’ve ever seen!’‘That depends on how you look at things. It has five qualities which, if you manage to hang on to them, will make you a person who is always at peace
with the world.
‘‘First quality: you are capable of great things, but you must never forget that there is a hand guiding your steps. We call that hand God, and He always guides us according to His will.

Second quality: now and then, I have to stop writing and use a sharpener. That makes the pencil suffer a little, but afterwards, he’s much sharper. So you, too, must learn to bear certain pains and sorrows, because they will make you a better person.‘Third quality: the pencil always allows us to use an eraser to rub out any mistakes. This means that correcting something we did is not necessarily a bad thing; it helps to keep us on the road to justice.‘Fourth quality: what really matters in a pencil is not its wooden exterior, but the
graphite inside. So always pay attention to what is happening inside you.
‘Finally, the pencil’s fifth quality: it always leaves a mark. In just the same way, you should know that everything you do in life will leave a mark, so try to be conscious of that in your every action.’

Be like the flowing river;
Silent in the night.

Be not afraid of the dark.

Remember, clouds, like the river, are water,
So, gladly reflect them too,
In your own tranquil depths.

Posted by Euphoria at 1:31 PM No comments: 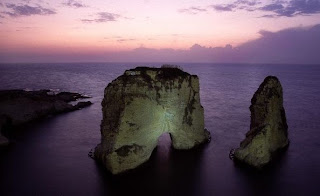 I've been working really hard for this semester, & thank God, I'm pleased with my results and as Aristotle said:
"The roots of education are bitter, but the fruit is sweet."

- I'm HOOKED on Facebook! interesting.. Finding old friends :)
- I'm sending my CV to Emar. I'm so interested! :D
- Is there any comming event for an Art exhibition in Jeddah?
- I so wanna go to Beirut in this vacation :(
- I can catch-up with my readings now, FINALLY.

P.S. the painting is by: Alma Tadema - A Coign of Vantage

Love winter and its lights 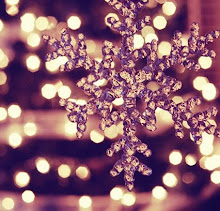 A sophisticated woman travels the world but never gets lost in the crowd. Her signature fragrance is reminiscent of all the places she visits and sights she sees.